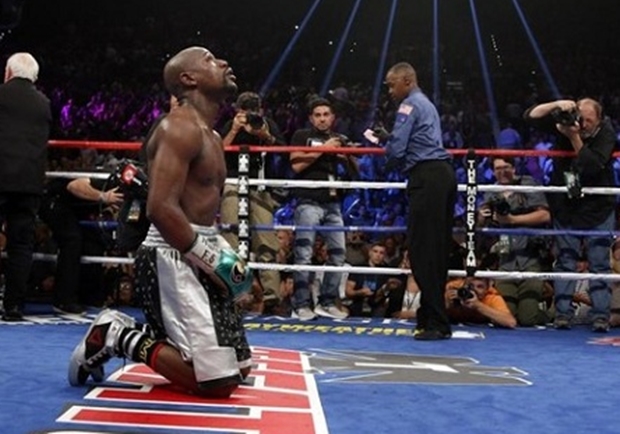 I guess that’s the best way to start out a column about the alleged end of the Floyd Mayweather era.

Truth be told, Mayweather has a lot to do with me deciding to write about boxing.

Back in late 2006, I had just discovered that there were people talking about boxing on the internet. I started to root around, only to discover a poorly-informed and agenda-ridden jumble of nonsense passing for news and discourse. Much of the nastiest, most dishonest stuff seemed to revolve around Floyd Mayweather, who had just severed his ties with Bob Arum and Top Rank.

I jumped in, first with some featured letters to the editor about the lynch mob forming to crush Mayweather. From there, I got my first offer of a job. Nine years later, I make a full-time living as a boxing writer, am blacklisted by much of the mainstream boxing media, and still find myself forced into positions where I must defend Mayweather from ridiculously unfair media attacks. Not surprisingly, I also have to defend myself from Mayweather true believers on the occasions when I criticize him.

It’s easy to dislike Mayweather and, from there, take the next logical leap and turn that dislike into dismissal, pissing on the man’s legacy as if being a press-stroking choir boy was ever a requisite for greatness in any chosen profession. The boxing media, for the most part, is made up of small men pursuing macho fantasy role play in their spare time. They hate easily and take pride in their bitterness.

When Mayweather crowed about being his own man and subsequently refused to stroke the egos of the media, he made himself the biggest target since Ali. Since breaking with Top Rank, the future first ballot Hall of Famer has been portrayed as a coward and a fraud, always avoiding his greatest challenge. And no matter who he beat or how much he was accused of ducking that person he beat, it just so happened that his greatest challenge was always the NEXT guy, not the one he just made look foolish. Nothing was good enough, nor would it ever be.

The media’s unfair coverage of Mayweather would turn him into a martyr of sorts and create an entire subsection of fandom dedicated to loving him and defending him against all attacks. As his notoriety grew at an even pace with the negative press. so did his earning power.

The mega-divisive Mayweather turned grown media men into hysterical drama queens willing to destroy their own professional credibility for a chance at bringing him down. He also turned otherwise discernible fight fans into brain-numb stooges who took pride in his riches and jealously defended his every move, right or wrong.

Whether by design or by fortunate happenstance, Maywather parlayed this grassroots civil war into the biggest money-making scheme of all-time. Playing to both ends, he made hundreds of millions of dollars appealing to his die hard fans while coaxing PPV buys from his detractors, who wanted so desperately for him to finally get his bloody comeuppance.

And while the boxing world was engaged in this us vs. them dynamic, Mayweather cruised to 49-0, too skilled for a generation of pugs frozen stiff by good footwork and the slightest hint of off-putting angles.

Critics of Mayweather’s resume tend to underrate his body of work and ignore the fact that all elite fighters play the risk/reward game of finding the biggest name at the most opportune moment.

Eight of Mayweather’s last fourteen fights have been against fighters he had been accused of ducking at one point or another and, up until this recent bout with Andre Berto, you’d have to go back to 2005 to find the last time he wasn’t facing a legitimate Top 4 fighter in his division.

In the ring, Mayweather was as good as he needed to be. As he got smarter about the shortcomings of his opposition and better at exploiting them, he also took fewer chances– a trait that frustrated many fight fans, but never really affected his earning power.

[Mayweather, The IV, and What to Believe]

But Mayweather also did plenty to create this negative vibe around himself and his body of work. A good portion of the criticism aimed at him is warranted.

Aside from his atrocious out-of-boxing history of violence against women, there’s the boxing-related jabs about him being too tied up in the risk/reward factor. On several occasions, he took on opponents he could’ve handled in their prime, but instead made them wait for the big money shot until they were mentally and/or physically finished as high-end fighters.

Mayweather took pride in being labeled a safety-first fighter and created an entire mixed-up personal philosophy around it, often carrying demoralized opponents a full twelve when a slight stepping on the gas could’ve ended everyone’s misery. Being a defensive wizard doesn’t have to mean one-shot-at-a-time, never-pursue-a-KO monotony– just ask Pernell Whitaker and Willie Pep, who both managed to not get hit while actually hitting their opponents.

The potential was there for Mayweather to truly be a TBE candidate, but, instead, unlike the true all-time greats, he did just enough to get by.

There are levels of greatness, but each level is accompanied by a level of risk. Mayweather did just enough to show that he was better than everyone else, but never opted to close the show and decisively prove it– like a brilliant engineer showing you a blueprint of his remarkable invention, but not bothering to ever actually build it.

This is not an indictment of Mayweather, but a statement of reality. And it’s hard to criticize a man in a potentially deadly combat sport for doing just enough to get by, especially if “just enough” has brought you hundreds of millions of dollars. But, realistically, this is not an attitude that fans generally respect, nor is it one which will endear his legacy to future generations. Nobody talks of the prudence of Marvin Hagler or the common sense of Archie Moore.

But even though he had matched himself against a hapless Andre Berto last Saturday night, Mayweather still had the chance to close out his career with a greatness-affirming bang.

Berto was a KO victim ready to happen, clueless on both offense and defense, and apparently rattled to the core by the event, itself. He was stiff moving forward, stiff throwing a punch, and seemingly buzzed by just about everything Mayweather landed flush.  But Mayweather never pursued the KO, once again content with doing just enough to show the world that he was the better man without actually proving it. Appropriately, Mayweather spent the last ten seconds of his boxing career in full sprint around the ring in celebration as a clearly buzzed Berto stood stiff-leg and perplexed, ready to be dropped by one or two more solid shots.

It was a shame that Mayweather opted to close his career by affirming all of his media lynch mob’s fiercest attacks. He fought a cherry-picked opponent with absolutely no urgency, never took any risks whatsoever, and showed no shame at cheating the fans with such a dismal show.

As someone who has defended the man and his talents, this last fight was a bitter pill to swallow. There was no defending Mayweather-Berto as a match-up and no defending Mayweather’s performance against a clearly overmatched opponent. This was a case of Mayweather cynically living down to the expectations of his most devoted critics and having a good laugh about it. But he got paid…and I guess that’s all that matters.

Maybe his next last fight will be more satisfying.