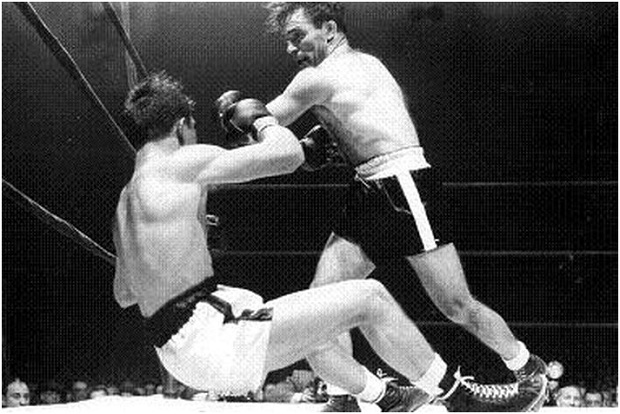 “Boxers last only a short time, but managers go on forever.”–Joe Greb

Gus Dundee and Buddy Brannen met in the movie The Harder they Fall and Buddy rendered a terrible beat down on Gus who thereafter suffered from severe headaches and brain damage going into his next fight with the Argentinean giant, Toro Moreno. The feather-fisted Moreno knocked the helpless Dundee out. He then lapsed into a coma and died. Max Baer was suitably cast as the menacing Brannon. Gus, of course, was badly damaged goods going into the Moreno fight and everyone knew it except the naïve Toro.

This was make-believe and it made for great theater and arguably one of the best boxing movies ever made. What was not make-believe was that Ernie Schaaf compiled a record of 49-15-1 that included wins over Max Baer, Jim Braddock and Tony Galento. In August 1932, he was decisioned by Baer in a rematch. However, he was actually saved by the bell when Baer knocked him out with seconds remaining in the fight. Six months later, an equally feather fisted Primo Carnera, to whom Toro Moreno was compared, knocked out Ernie in 13 rounds. Schaaf died four days later. Many believe the injuries suffered in his bout with Baer contributed to his death. Schaaf, of course, was the fictitious Gus Dundee.

The first such chilling fight I witnessed was on television when I was in grade school (I was around 13 at the time).

This was a televised middleweight fight from St. Nicholas Arena in New York City which, as I recall, took place on a Wednesday night and I believe Don Dunphy was at the mike. Back then Jimmy Powers was doing the fabled Friday night bouts. Hundreds of thousands would watch it of over the CBS network telecast. The setting was quintessential 50’s.

Roach was well ahead in the fight and seemingly on his way to an easy points win. His reward would be a match with Sugar Ray Robinson. Suddenly Small uncorked a desperation shot in the eighth stanza that landed squarely on the ex-Marine’s jaw. It was a right hand blow. And just like that, the tide of the fight changed

The blow ripped into Roach like a sledgehammer and the blood immediately gushed from his lips and mouth. Bleeding profusely and staggering, he managed to hang on until the bell rang. While he somehow made it through the ninth using every survival trick he knew, he was a bloody mess and the one-sided assault continued through the tenth until another crunching right put Roach down like he had been sapped. Everyone watching, my Dad, my friends, started to scream “Stop it! Stop it!” Little did I know at the time that I would repeat this scream many times in the future. The fans at ringside were doing the same, and referee Frank Fullam did just that, but just as he did another shot sent Roach sprawling. Unfortunately, the damage already had been done.

As Lavern lay glassy eyed on the blood-spattered canvas, he motioned that he was ok, but he was anything but. All of a sudden, he went slack eyed and unconscious. We all said “oh no, oh no,” because our instincts told us that something very bad was happening. The raw-boned Texan quickly lapsed into a coma. Fourteen hours later, Lavern Roach, just 24, passed away from a subdural hemorrhage in St. Clare’s Hospital.

We had watched this one from the safe confines of our living room and it was my first chilling experience witnessing a ring fatality. Though I have seen far too many since 1950 (including Paret-Griffith, Mancini-Kim, Classen-Scypion, Wangila-Gonzalez, Johnson-Chavez, Tomasello-Dotse, and Scottland-Jones), this is the one that has stayed with me through the years. Thank God, the fight had been televised in black and white. The amount of blood that flowed was beyond description.

But wait. There is more to the story. Less than two years previously, Roach had been badly beaten by the legendary Marcel Cerdan, 105-2 at the time in front of 17,000 fans in Madison Square Garden.

The Texan had been clubbed to the canvas three times in the second round and four more times in the eighth as Cerdan’s monster blows continued to rain down upon him. As he crawled around the ring, the slaughter was finally and mercifully stopped after eight punishing rounds. Roach had been brought along too fast to fight the likes of the great Frenchman, even though Laverne had taken the measure of tough and favored Tony Janiro in 1948.

Two things contributed to Lavern’s elongated beating. First, when he had been slugged and mugged to the canvas in the second round, he was dazed and waited for the count, but timekeeper Jack Watson didn’t begin one until the referee ordered him to do so. Watson finally did and Roach got up at the count of 9 with the entire fiasco using up 32 seconds. As it turned out, Lavern would have been better served had he been counted out.

The second thing was the fact that just when Roach appeared ready to go, he would fight back with just enough to stay in the fight. Indeed, he was still countering in the seventh, but things finally ended in the eighth stanza when referee Artie Donovan put an end to what had become a slaughter. The accumulation of brutal punishment and numerous knockdowns over 8 rounds had been mind boggling. Still, up until that beat down, Lavern had been 23-1 with his only loss coming at the hands of rugged New Yorker Artie Towne, a gifted boxer with a great record (who fought as one Henry Johnson when he beat Roach). In fact, Roach had been Ring Magazine’s Rookie of the Year in 1947.

After the Cerdan massacre, Roach said goodbye to boxing and went back home to peddle insurance, but after two years and a few warm-up fights, he would come back in the ring, likely as badly damaged goods. He was back in for one last time.