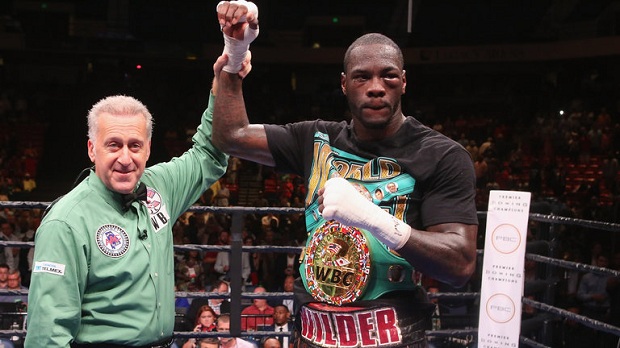 Nobody gets faked out the way boxing fans and media get faked out. Dip some juicy, bloody propaganda into that shallow end of the gene pool and you are guaranteed to get equal and opposite knee-jerk reactions. And the perfect example of that is the unholy brouhaha over Deontay Wilder.

To some, the 6′ 7″ “Bronze Bomber” is a laughingstock of a fraud whose every move is reviled and whose every flaw is marked as proof of his ultimate, absolute terribleness.

To others, Wilder is the savior of the heavyweight division and the harbinger of a restored American presence at the top of boxing’s heavyweight food chain.

To the realist with proper inoculation against the virus that is boxing hype, Wilder is what he is and he’s doing as well as can be expected against a proper level of opposition.

Needless top say, I consider myself to be firmly in this last group of people.

Wilder’s a fringe, raw Top 10 talent who is still developing and has plenty of assets, but also quite a few liabilities. He’s fighting at the level appropriate to his ability right now as a late-comer to the sport. There’s nothing shameful in any of that.

I think fighting and beating a guy like Johann Duhaupas at this stage of his career only becomes an issue if you allowed yourself to become immersed in the hype– either overrating him as an instant king or damning him as a fraudulent heir to the throne.

Right now, as things are, I don’t see how anyone could support either extreme of the Wilder debate.

The guy is a work in progress as someone who first laced up a pair of gloves at nearly twenty years of age. Other notable late-comers to the sport, Sergio Martinez and Antonio Tarver, didn’t become truly seasoned pros until they were 33 or 34 years of age. Wilder is 29.

If Wilder’s resume is thin with names like Bermane Stiverne, Johann Duhaupas, Malik Scott, and Siarhei Liakhovich making up his personal career Mr. Rushmore, blame common sense on the part of Team Wilder. This is merely where he’s at, developmentally, as a fighter.

My personal assessment of Wilder is that he probably belongs somewhere between no. 6 no. 8 in the world when it comes to “who beats who” at heavyweight and maybe around no. 14 or no. 15 in terms of resume. All together, this makes him a fringe Top 10 guy and, as I said, fighting at just about the right level when considering his current skill level and experience.

But what about the WBC world title around his waist?

I guess if you’re going to be mad about something, being mad at the bogus ‘world champ’ tag in a division where there’s already an undisputed world champ is understandable. But let’s not pretend that Wilder is all alone in being a paper champ who got to the top of the ratings via dubious boardroom maneuverings.

Just a casual run-through of today’s biggest and best will give you an idea of just how common this practice is. So, let’s lay out a partial list of fighters who entered the world scene as paper champs or who have acquired paper titles at key career points: Manny Pacquiao, Saul Alvarez, Gennady Golovkin, Sergey Kovalev, Miguel Cotto, Keith Thurman, Amir Khan, Carl Frampton, Timothy Bradley, Peter Quillin, Vasyl Lomachenko, Arthur Abraham, David Lemieux, Daniel Jacobs, Erislandy Lara…and I could go on and on and on…

Some paper champs go on to prove themselves as the “real deal,” others serve as resume-filler for the next wave of talent. To hold one paper champ up for scorn while ignoring the fact that almost everyone else is or has been a paper champ is naive and disingenuous, at best.

Yes, ideally, nobody would be able to call themselves heavyweight champ without first beating Wladimir Klitschko. But what fighter would reject one of the four recognized world belts if it was practically dumped in his lap? And shame on anyone, in this day and age, for taking any of the alphabet organizations and their title designations more seriously than they do. Wilder holding the WBC strap means nothing other than he has physical possession of a belt with the letters WBC stamped on it.

Deontay Wilder beating the fondue out of Johann Duhaupas for eleven rounds– and taking some return fire along the way– is about right. If you think otherwise, maybe you need to reassess how much your outrage is based on reality and how much is based on everything but the actual X’s and O’s of the sport.