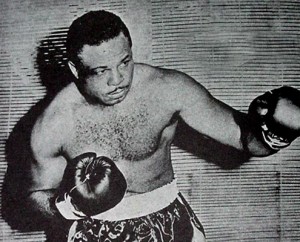 If Boxrec is to be believed, Archie Moore is the greatest fighter of all time on a pound-for-pound basis. It’s not a bad choice; really, you could have your pick between Moore, Sugar Ray Robinson, Muhammad Ali…one thing that is in no doubt is that Archie Moore is one of the very best.

This is also why Moore has not yet appeared on Historical Fight Night; the Temporal Commission simply couldn’t find a match for him. Put him in at heavyweight and he runs into the same problem that he did when he fought guys like Marciano. Put him in at light heavy and the best matchups for him don’t top the best fights of his actual career (Joey Maxim and Ezzard Charles come to mind.)

So why not put a thumb on the scale and handicap Moore a little bit? The boys with the time machine dropped it into 1959 to grab a 42-year-old Moore from the last great performance of his career, a three-round stoppage of Yvon Durelle.

Moore steps into the ring against Matthew Saad Muhammad, who’s been pulled from his second fight with Yaqui Lopez, the 1980 Fight of the Year, a fight that featured one of the greatest rounds in the history of the 175-pound division in Round 8. Saad Muhammad was in the midst of a glorious two-year, nine-fight run atop the light heavyweight ranks, and although he’s a big underdog tonight, he’s counting on Moore getting old in eight weeks’ worth of time in the future.

Your co-feature? John “The Beast” Mugabi takes on Gennady Golovkin in a battle of the brutal punchers at a 157-pound catchweight. Mugabi is 2-0 on this show with a pair of knockouts, one over Iran Barkley, the other over Fernando Vargas. Golovkin has been in an old-vs-new battle of this sort before; he was pasted in seven rounds by Marcel Cerdan in September. He looks to restore his honor against the fighters of the past tonight in a blink-and-you’ll-miss it bout.

This time around, we’ve grabbed Mugabi from his fight with Bill Bradley. It was his last fight before he stepped into the ring against Marvelous Marvin Hagler; for the Hagler fight, Mugabi weighed 157.

Golovkin, meanwhile, has never weighed in below 158.5 pounds, but he agreed to this fight at a 157 catchweight for a chance to fight someone other than Marcel Cerdan; Golovkin’s camp expressed a desire to become the greatest of all time by fighting the greatest, and given the state of the middleweight division in 2015, John Mugabi would surely have a belt or two in today’s title landscape; he’d certainly clobber David Lemieux with such ferocity that the subject has never even so much as come up as a serious fight in Temporal Commission circles.

Mugabi’s fight plan was to throw everything he had and test the chin of Golovkin; GGG, for his part, looked to beat Mugabi to the punch with straight shots. We’ll see which style works better as the fight begins:

Marcel Cerdan landed a few of those looping shots against Golovkin en route to a knockout victory. Mugabi threw them a lot tighter than did Cerdan, whose fighting style was very 1948 in its manner.

GGG found himself with a much shorter window of opportunity to punch inside the wide shots, and he got his clock cleaned with a crushing left hook that pushed him back almost instantly. Golovkin’s made his money out-slugging the sluggers, beating the tar out of the likes of David Lemieux that way, but the clean shot from a guy who had, at this point in his career historically, knocked out all 25 of his opponents and was in the midst of a five-fight run going a total of 12 rounds? That threw Golovkin for a loop.

Mugabi went right after him, not allowing the Kazakh a moment’s peace, pouring on the punishment, taking advantage of the opening he’d created, and it was all GGG could do simply to survive the round.

Golovkin shook off some of the cobwebs in between rounds and came out looking to land a shot of his own, trying to time Mugabi and get that straight right hand between the big shots. Once again, his timing was just a tick off, and the big left hook got there first. GGG staggered back, overpowered for the first time in his life, up against a guy who was about to give Marvin Hagler the fight of his life. This is the Mugabi it took one of the greatest middleweights of all time eleven rounds to finish off, and it showed.

Mugabi battered away at Golovkin for the remainder of the stanza; GGG got plenty of credit for his heart and none for his ability to withstand a shot; once that first big punch landed in the first round, it was simply a matter of time.

The end came when Mugabi put a straight right behind a left hook. Golovkin got hit by the hook, his reaction time slowed by the blows of the Ugandan fighter, and it served mainly to shove his head right into the path of an oncoming truck in fistic form.

GGG crumpled like a sack of potatoes on the canvas. One case of beating a guy to the punch had snowballed into a complete, absolute domination; it was either testament to Mugabi being underrated on account of fighting in the age of kings at his weight, or it was a scathing indictment of the quality of middleweight boxing on offer in 2015, but whatever the cause, whatever your interpretation, the simple fact remained that Golovkin had gone toe-to-toe with the Beast…and got his ass kicked. The Beast is now 3-0 on Historical Fight Night, king of the second tier. Nobody’s throwing him in against Monzon…

We mentioned at the top of the show that Moore had the handicap of being brought in right after the last great fight of his career. In many ways, however, we just learned in the Mugabi fight what can happen when straight punches don’t beat round ones. Moore threw a right cross that was very much like a hook, and a left hook that was shaped like itself.

Would history repeat itself in ways that the very nature of this show is designed to prevent? Or would straight punches make the HFN Arena no country for old men?

Saad Muhammad didn’t waste his time trying to stick a power shot in between all those looping shots. The Philadelphian had pumped his jab out to great effect against Yaqui Lopez in his time machine fight, and knowing he was against an all-time great, Saad Muhammad wanted mainly to keep Moore off him and wear the old mongoose down.

Moore had a decent jab of his own when he wanted to use it, but the jackhammering nature of the younger man’s jab seized the advantage in this contest early, landing and getting thrown with greater frequency in this opening stanza.

Moore went more defensive this time around. When the jab, or any other sort of punch, came at him, he would slip, block, and otherwise blunt their effect, ready always to take advantage like a soldier waiting for the enemy to reload after firing a salvo, using that opportunity to jump in and take advantage of any slip in moving from offense to defense.

Saad Muhammad wouldn’t let Moore have that kind of tactical advantage, however, sharper in this fight than he had been in his history with the gravity of the situation clear to him.

Not a lot of damage was done, but Matthew Saad Muhammad had just outfoxed Archie Moore for two straight rounds. Two rounds in a 12-round fight may not amount to much, but it was better than being down 0-2.

Saad Muhammad had tremendous versatility in his lead left hand. He could snap out jabs, switch them to hooks, and even throw lead uppercuts with bad intentions, all without even so much as involving his right hand; in that Lopez fight, Saad Muhammad often appeared to handcuff himself when in reality it was excellent body balance that carried the day.

The former Matt Franklin continued to work that lead hand, converting it on occasion to a crunching lead left uppercut to the body. That got Moore’s attention as he winced from the force of the fist landing on the solar plexus.

Three rounds in, Saad Muhammad was putting on a masterpiece. He outboxed the old legend, making him look slow, making him look like the mediocre fighter he would become in his waning years as he advanced through his forties before finally getting put into retirement when nearing fifty.

Six rounds had passed, and nobody but a fool would believe Matthew Saad Muhammad hadn’t won all six of them. It seemed impossible, but the fight entered a frame where Moore needed a knockout.

Moore kept looking to survive and counter, trying to find an opening against the smaller man, and again we see echoes of Yaqui Lopez in this contest. In that great eighth round, Lopez absorbed some punishment, blocked the rest, and connected cleanly at a point midway through the round to stagger the man in front of him.

Archie Moore landed one. Saad Muhammad staggered. Moore gave chase. And the younger man, seemingly seeing the momentum turn against him, came back with a straight right hand over the top that got inside the round shot of Archie Moore and dropped him. Counterattack thwarted. 10-8 round earned. Upset in progress.

All those punches took their toll, and psychology did the rest. As good as Archie Moore was, and as almost assured as a win could be if we’d grabbed him from 1949 rather than 1959, putting a 42-year-old man into a time machine tilted the balance just enough. Saad Muhammad scored another knockdown on a lead left uppercut. Moore beat the count, but the fight was beaten out of him.

In time machine boxing as in the sport as a whole, sometimes you just get an utterly improbable upset. As Moore looked only to survive the last two rounds, such was his fate.

Hey, remember when we had cruiserweight Evander Holyfield taking on Rocky Marciano, a nod to the smaller stature of the old-time heavyweight champs? Well, the Real Deal is back, and this time he’s taking on another old-timey heavyweight titlist, as Ezzard Charles steps into the time machine from his second win over Jersey Joe Walcott in 1951 for a battle with a 190-pound limit.

Your co-feature? Juan Manuel Marquez, at his featherweight best, steps into the time machine for a killer matchup…and once again, we mean that literally. Sugar Ramos, sent to the future after killing Davey Moore, is Dinamita’s opponent.

Want to give the Christmas gift that keeps on giving? Head on over to Patreon and subscribe—give as little or as much as you can, and you can help support the development of the greatest historic show in boxing. We’re one of the last bastions of longform literature, and we do it every single week. Happy holidays to you all, and join us next week to start off 2016 with a bang. Thanks for reading!