On September 16th in 2017, the sport will likely get that desire as Saul ‘Canelo’ Alvarez and Gennady Golovkin face off for middleweight and pound-for-pound supremacy in Las Vegas. It’s the most attractive and highly anticipated bout that could have currently been made and is set to provide fans with an exciting spectacle when the first bell sounds at the T-Mobile Arena in Nevada.

In one corner will be arguably the biggest name and draw in boxing, outside of Anthony Joshua, in the form of Mexican superstar Canelo Alvarez. Across the ring from him will stand Kazakhstan’s undefeated and so far indestructible middleweight kingpin ‘GGG’, who comes into this bout on the back of a unanimous decision success over stern challenger Daniel Jacobs.

The pair had been tipped to collide in the ring a lot earlier in their careers, a move which would have seemingly favoured the older and more experienced champion Golovkin. But Canelo’s representatives at Golden Boy Promotions and his main boss Oscar De La Hoya made the smart, yet frustrating, business move of letting the mega-fight marinate over time.

In that time, both guys have enjoyed huge success and grown their respective reputations even more on a global scale, which will help sell this fight in terms of pay-per-view numbers in the United States of America and beyond. That being said, it’s Golovkin who will enter as the strong favourite in the boxing odds, at 31/50 to triumph.

But for real boxing fans, this super-clash needs no further hype or selling, it simply is the big one, no matter what Floyd Mayweather Jr or Conor McGregor say. Canelo and Golovkin have been on a collision course for many years, with the latter having reigned as the dominant knockout artist at 160 pounds so far. 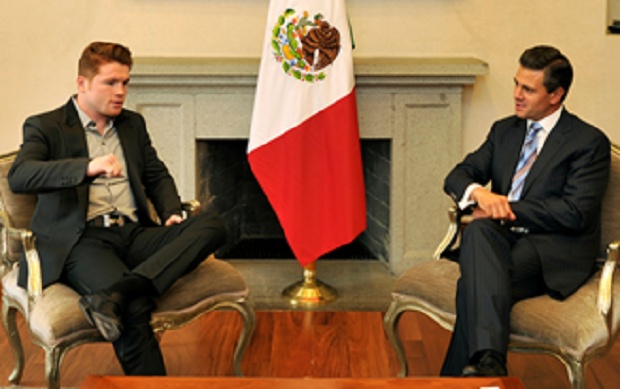 Meanwhile, Mexican star Canelo has been busy working his way up in weight and finally agreed and announced the biggest fight of his career in May after his lopsided decision triumph over compatriot Julio Cesar Chavez Jr. Fans witnessed an awful matchup that night in Las Vegas but they were treated to a big surprise when Canelo and Golovkin came face-to-face in the ring after the final bell to officially announce they will do battle on September 16th in Sin City.

Canelo has undoubtedly improved vastly since losing to Mayweather back in September 2013, having now bulked up massively and become one of the biggest threats in the sport. But his toughest career task to date will come against the imposing and intimidating stature of Golovkin, known as ‘the God of War’.

In the lead up to this highly awaited encounter, both men have rallied to impressive victories against big-name opponents. Golovkin was taken the 12-round distance for the first time ever by Jacobs but still ran out the winner, while Canelo easily dispatched Chavez Jr, following wins over smaller foes Liam Smith and Amir Khan.

All roads now lead to Canelo versus Golovkin on September 16th, in what will be the biggest bout of the year.