Later this month, British heavyweight champion Anthony Joshua will step into the ring to take on Russia’s Alexander Povetkin. And right now, the guys from the online casino bgo.com are giving you the chance to win tickets to see the fight by playing across all their brilliant slot, jackpot and live casino games!

Who is Anthony Joshua?

AJ, who was a relatively late comer to the sport, started boxing in 2007. He was 18 years old when he joined the Finchley ABC club in Barnet, North London, and quickly proved he had a natural gift. He won the Haringley Boxing Cup for two consecutive years in a row and was offered (though refused) an initial £50,000 to turn professional. By 2011, he had secured a place on Team GB to train for the 2012 London Olympics, where he went on to win super-heavyweight gold.

It wasn’t until 2013, the same year he received an MBE in recognition of his services to the sport, that AJ signed a contract with Matchroom Boxing to begin his professional career. He now holds WBA Super, WBO and IBO belts.

But if AJ is to defend these titles, he must defeat Povetkin in his upcoming fight at Wembley Stadium on Saturday 22nd September. It promises to be a dramatic encounter. Povetkin, a fellow Olympic champion who has only suffered a single defeat since 2005, will be one of AJ’s toughest opponents to date.

Thanks to bgo.com, you could be there to witness this incredible heavyweight showdown live from VIP seats.

How can I win fight tickets?

Register for a bgo account now, then opt-in to the Fight Night Tournament on the site’s promotions page. If you wager £100 playing any of their 600+ online games before midnight on Thursday 13th September, you’ll be awarded entry into an exclusive slot tournament. Here you’ll get to go head-to-head playing against rival bgo players for the chance to win VIP tickets to the fight, complete with food, drinks and hotel accommodation close to Wembley Stadium.

There are lots of other prizes up for grabs too, including cash and free spins on some of bgo’s most popular slots. General terms and conditions of the promotion can be found below. Full details can be found on the site’s main promotion page. 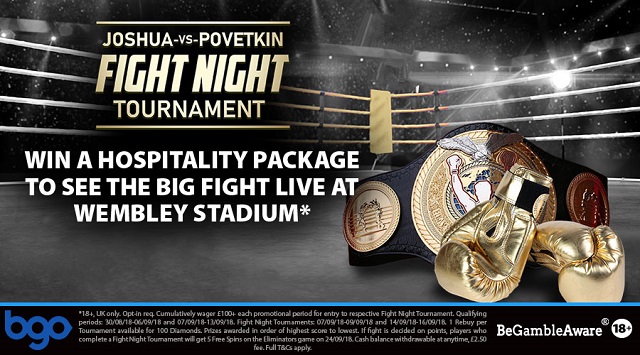