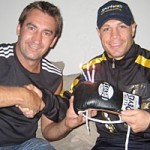 First of all I would like to apologize to John Murray for accusing him of losing his balls. I have seen you fight John and you showed that you have plenty in the ring. My point was you called Michael out publicly on more than one occasion and claimed Michael has not fought the best in England ! I gave your team an opportunity to make this fight, even though you have nothing … END_OF_DOCUMENT_TOKEN_TO_BE_REPLACED