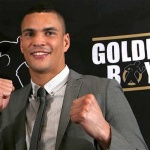 Undefeated UK middleweight Anthony Ogogo (7-0, 4 KO's) has undergone surgery to relieve chronic Achilles pain in both of his tendons. The 2012 British Olympic bronze medalist has battled this ailment since 2010, originally noticing his condition during the Commonwealth Games in India. The pain worsened over time and became so bad that during the Olympic Games he was unable … END_OF_DOCUMENT_TOKEN_TO_BE_REPLACED