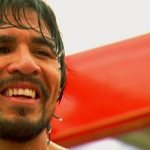 If Antonio Margarito had his way, he would've been jumping for joy and celebrating at The Staples Center in 2009 while an unconscious, disfigured Shane Mosley poured blood on to the canvas from various open facial wounds. The Tijuana sewer rat would've been giving his post-fight interview with a big, dopey grin and yelling "Viva Mexico" with the full knowledge that he was using … END_OF_DOCUMENT_TOKEN_TO_BE_REPLACED 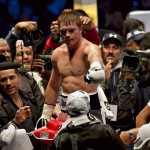 Saul Alvarez, the heir apparent to Mexican boxing hero status, was dealt a TKO Saturday night at the Monumental Plaza de Toros in Mexico City. However, the blow didn't come from opponent, Kermit Cintron, who was easily taken out via fifth round TKO. Canelo's defeat came at the hands of the Mexican fight fans, who only filled the venue to about half-capacity. The slow ticket … END_OF_DOCUMENT_TOKEN_TO_BE_REPLACED