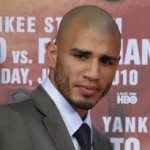 by Tim Harrison On Saturday, December 1, 2012, Miguel Cotto, former two-division world champion, would lose a 12-round decision to Austin “No Doubt” Trout. The loss to Trout would be his second in a row. This loss came after a spirited losing effort against Floyd Mayweather on May 5, and was a clear sign that the end of the road for Cotto was nigh. The once-feared Boricua got … END_OF_DOCUMENT_TOKEN_TO_BE_REPLACED