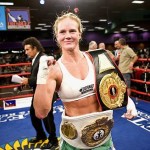 It looks like Dana White has had a change of heart when it comes to Holly Holm. It was reported in March that the MMA kingpin had no interest in the 32 year old multiple world title holder but now, the former world boxing champion (boxing record 33-2-3, 9 KO’s) has joined White’s UFC. The Albuquerque fighter, who held titles both the junior welterweight and welterweight … END_OF_DOCUMENT_TOKEN_TO_BE_REPLACED