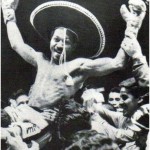 With Cuban boxers grabbing the public’s attention, I would like to tell a story (or two, actually) that I really like. A story related to Mexico in a different way than the usual rivalry. A nation adopted two boxers, who were born and raised elsewhere, and cherished them as their own. The stories of none other than José Nápoles and Ultiminio Ramos. Cuba has thousands of … END_OF_DOCUMENT_TOKEN_TO_BE_REPLACED