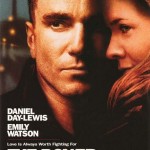 by Charles R. Horgan In my ongoing series, I randomly pick a boxing-themed movie from the “streaming” section of Netflix and give it a whirl. This week, we enter the blue-tinted world of Northern Ireland in Jim Sheridan’s The Boxer (1997, 113mins), and watch as he fights folks in the ring, and fights the violent culture of I.R.A. men that have become addicted to violence. … END_OF_DOCUMENT_TOKEN_TO_BE_REPLACED