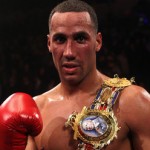 By Geoff Poundes Britain’s Olympic champion James DeGale, 14-1, 9 KO’s became the WBC “Silver” super-middleweight champion when he widely outpointed Colombian Fulgencio Zuniga, 25-7-1, 22 KO’s over 12 rounds. The 35 year old Zuniga came smilingly to the ring but left it with his head ringing, after DeGale spent thirty-six minutes hitting him pretty much as he pleased. Not … END_OF_DOCUMENT_TOKEN_TO_BE_REPLACED

By Geoff Poundes On Saturday night Britain’s much maligned Olympic champion James DeGale, 13-1, 9 KO’s continues his fistic education when he confronts four-time world title challenger Fulgencio Zuniga, 25-6-1, 22 KO’s over 12 rounds. The WBC “Silver” 168 pound belt is up for grabs (a world title eliminator by any other name). DeGale’s love-hate relationship with the … END_OF_DOCUMENT_TOKEN_TO_BE_REPLACED

By Geoff Poundes Britain’s forgotten Olympic champion, James DeGale, finally gets his career back on track after a number of false starts when he defends his European super-middleweight belt in London on Saturday night. DeGale has at last emerged from a debilitating battle with promoter Frank Warren over his promotional contract (a battle he won) and is now signed up with … END_OF_DOCUMENT_TOKEN_TO_BE_REPLACED 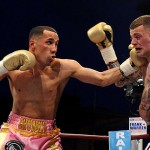 By Geoff Poundes James Degale took a step towards redemption, and perhaps in the direction of a world title, when he stopped Cristian Sanavia in Denmark tonight. The irrepressible Degale, who’s looked out of his sorts in his last couple of outings, returned to form and stopped the over-matched Italian in the fourth round in defence of his European crown. It was … END_OF_DOCUMENT_TOKEN_TO_BE_REPLACED

By Geoff Poundes Unloved and unwanted at home, Englishman James Degale takes his show on the road this weekend when he travels to Denmark to defend his newly won European super-middleweight title against experienced Italian Cristian Sanavia. Degale, the reigning Olympic champion, has had a topsy-turvy ride as a professional, but his talent is undoubted and in the long … END_OF_DOCUMENT_TOKEN_TO_BE_REPLACED