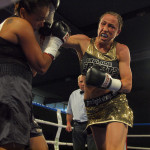 A triple header of womens boxing took place in Bayern, Germany Saturday night. Two world title bouts and a non-title 10 rounder, headlined by the return of the former WIBF lightweight champion, Rola El Halabi, who suffered what appeared to be career ending injuries in April of 2011 when she was shot by her step father, Roy El Halabi. In January of 2011, Rola had terminated … END_OF_DOCUMENT_TOKEN_TO_BE_REPLACED