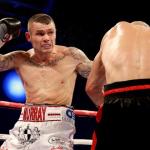 It was the worst kept secret in Monaco, but the bout between Martin Murray and Domenico Spada was little more than a prelude to a February 2015 contest between WBA middleweight champ Gennady Golovkin and the UK's Murray. As for Saturday's contest, itself, it was a predictable win for the more talented Murray (29-1-1, 12 KOs), who didn't dazzle, but managed to dominate the … END_OF_DOCUMENT_TOKEN_TO_BE_REPLACED

ESPN3.com has picked up the rights to carry the live stream of this Saturday's interesting and diverse boxing card from Monaco. Headlining the five-fight card will be UK middleweight Martin Murray (28-1-1, 12 KOs) against Italy’s Domenico Spada (39-5, 19 KOs). Murray,32, whose career-best efforts have thus far earned him a tough decision loss to Sergio Martinez in 2013 … END_OF_DOCUMENT_TOKEN_TO_BE_REPLACED 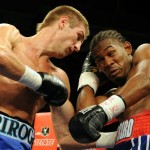 (AFP/Getty Images) As promised following his brutal fifth round title-winning KO of Daniel Jacobs last year, WBO middleweight champ, Dmitry Pirog (17-0, 14 KOs) is taking the belt back home to Russia for his first defense. Pirog will be facing Argentina's Javier Francisco Maciel (18-1, 12 KOs) this coming Saturday. Maciel has never fought outside of Argentina and has faced … END_OF_DOCUMENT_TOKEN_TO_BE_REPLACED