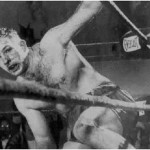 "After World War II, everything in life is a cakewalk."-Danny Nardico "On the day my father died, we were informed that he was elected into the New Jersey Boxing Hall of Fame. That meant the world to me, and it would have meant the world to him if he had been there to experience it himself."--Charley Norkus, Jr. "Norkus was as honest of a fighter as the day is long, and … END_OF_DOCUMENT_TOKEN_TO_BE_REPLACED