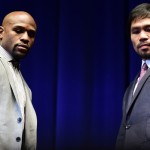 Back when George Foreman was making his infamous comeback, a teenage me approached my boxing mentor after hearing that some of Big George's early opponents had been accused of taking a dive. "I don't see it," said a wide-eyed me. "There's too much money involved to have these fights fixed." The response I got stuck with me. "There's too much money in play for them NOT … END_OF_DOCUMENT_TOKEN_TO_BE_REPLACED