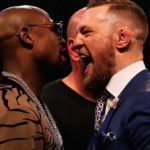 Ahead of Floyd Mayweather’s clash with UFC champion Conor McGregor, interest was so high that the anticipated pay-per-view showdown was already projected for 5 million buys, breaking the record previously set for Mayweather’s bout against rival Manny Pacquiao in 2015 at 4.6 million. Reports are scarce, but indications are that Mayweather/McGregor will not only meet its … END_OF_DOCUMENT_TOKEN_TO_BE_REPLACED