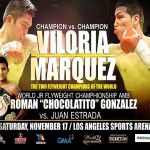 At 16 years of age, Hernan Marquez became a father. The 500 pesos he earned a month from the Mexican Olympic Committee for being National Amateur Champ and the few pesos he made as a baker's assistant in his native Empalme, Sonora weren't going to be enough to pay the bills. The young southpaw with dreams of Olympic gold was then left with the task of convincing his mother to … END_OF_DOCUMENT_TOKEN_TO_BE_REPLACED