by Tim Harrison Pound-for-pound king is a mythical title that is thrown around in describing the best fighters in the sport. The torch is passed from fighter to fighter and from generation to generation. The current pound-for-pound king, Floyd Mayweather Jr., turns 36 next Sunday and he’s started showing signs of aging, however so slightly. He won’t be around forever, and … END_OF_DOCUMENT_TOKEN_TO_BE_REPLACED 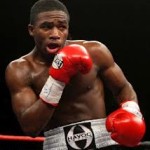 by Tim Harrison Adrien “The Problem” Broner (26-0, 22 KOs) made good on his promises to make short work of his opponent on Saturday night when he stopped a gutsy Gavin “The Rock” Rees (37-2-1, 18 KOs) in five rounds on Saturday night at the Boardwalk Hall in Atlantic City, New Jersey. And on the undercard, Sakio Bika scored a decision win over Nikola Sjekloca to earn the … END_OF_DOCUMENT_TOKEN_TO_BE_REPLACED

By Geoff Poundes Kell Brook failed to take the major step towards international recognition he needed tonight when he barely outpointed American Carson Jones over twelve see-saw rounds at the Sheffield Motorpoint Arena. The unbeaten Brook, now 28-0, 18 KO's, took charge from the opening bell, and out-classed the ever willing Jones for six rounds before succumbing to the … END_OF_DOCUMENT_TOKEN_TO_BE_REPLACED 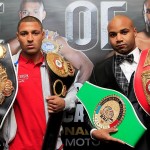 By Geoff Poundes There’s a bit of spite in the air in the run-up to Saturday night’s IBF welterweight title eliminator between Britain’s Kell Brook and American Carson Jones. Of course, spite is de rigeur these days, and if fighters can’t feel it, their promoters ensure they can manufacture it, what with television audiences and ticket-buyers eagerly watching on. The … END_OF_DOCUMENT_TOKEN_TO_BE_REPLACED