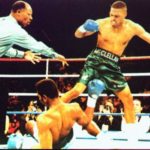 In boxing, the bout is the most important thing. Subjecting yourself to a fighting competition means you would have gathered the courage and the art of endurance. Some boxing legends had the fastest knockouts of about 17 seconds. Yes, 17 seconds, it may sound funny but there must be a very good reason behind these shortest matches in history. The shortest match ever You might … END_OF_DOCUMENT_TOKEN_TO_BE_REPLACED

It’s been called the fight that defined the 90’s. Today is its 20-year anniversary. Nigel Benn and Gerald McClellan faced off on February 25th 1995 at the New London Arena in Millwall, London, United Kingdom in front of over 10,000 fans and millions more watching on live TV worldwide. The event, co-promoted by Don King and Frank Warren was dubbed “Sudden Impact”. At risk … END_OF_DOCUMENT_TOKEN_TO_BE_REPLACED