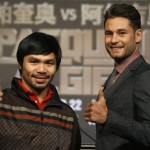 Spin it however they like, but when HBO announced that they were going to condense the Manny Pacquiao-Chris Algieri 24/7 series into just one thirty-minute episode, it spoke volumes. When it comes to the upcoming November 22 pay-per-view from Macau, the best idea is to cut costs, stop the flow of corporate revenue, and hope things aren't a total bust. HBO knows this and is … END_OF_DOCUMENT_TOKEN_TO_BE_REPLACED