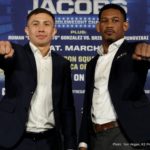 After nearly 15 destructive defenses and at 35 years of age, Gennady Golovkin is facing off against who many believe is his toughest opponents to date in Daniel Jacobs. Jacobs possesses the kind of athleticism and talent that is uncommon among the Middleweight king’s previous conquests and not only has the skill to put up a fight, but can hold his own if need be. Though … END_OF_DOCUMENT_TOKEN_TO_BE_REPLACED 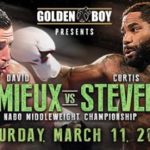 In a bout that served as a process of elimination for the Middleweight division, Lemieux and Stevens both came in the fight knowing that a win could re-ignite the momentum each man lost after being respectively battered by Gennady Golovkin and a loss would be devastating for their future prospects. Not as devastating, however, as the left hook that Lemieux landed that not … END_OF_DOCUMENT_TOKEN_TO_BE_REPLACED 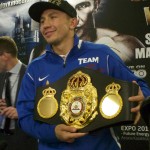 By Phil Rivera New York, New York- Soon after Gennady Golovkin's third round stoppage of Daniel Geale in front of 8,500 fans at Madison Square Garden, the two fighters, along with Bryant Jennings--who beat Mike Perez in the nights co-feature--took questions from the press. Here are some quotes; Gary Shaw (Promoter of Bryant Jennings and Daniel Geale): "Bryant Jennings … END_OF_DOCUMENT_TOKEN_TO_BE_REPLACED

By Phil Rivera New York, New York- If you thought Glen Tapia’s sudden absence from the non-televised portion of tonight’s Gennady Golovkin-Daniel Geale card at Madison Square Garden would have a great impact on its excitement value, you were wrong. Although the dark show was highlighted by boxers like Ola Afolabi—whose (21-3-4, 9 KOs) record doesn’t exactly put him on a … END_OF_DOCUMENT_TOKEN_TO_BE_REPLACED