by Fox Doucette It would seem that 70 pro fights might very well be the limit for Glen Johnson (51-17-2, 35 KOs) as he showed every one of his 43 years in a lopsided unanimous decision loss to Andrzej Fonfara (22-2, 12 KOs) at the UIC Pavilion in Chicago on ESPN2 Friday Night Fights. In the co-feature, Jose Luis Castillo (64-11-1, 55 KOs) got a lot of help from a no-balls … END_OF_DOCUMENT_TOKEN_TO_BE_REPLACED

by Fox Doucette Veteran of more battles than a Star Trek captain Glen “The Road Warrior” Johnson (51-16-2, 39 KOs) takes on Polish fringe prospect Andrzej Fonfara (21-2, 12 KOs) in the main event of ESPN2 Friday Night Fights from Chicago; Johnson has said that if defeated he will retire (and considering his level of opposition, he probably should retire if defeated.) In the … END_OF_DOCUMENT_TOKEN_TO_BE_REPLACED

By Fox Doucette This year, there has been a plethora of fighters who have lost their unbeaten records on ESPN2. Yordanis Despaigne, Mike Dallas, David Lemieux, the list goes on. Ruslan Provodnikov (19-1, 13 KOs) was the first victim of that so-called curse on the very first fight card of the year, when he lost a head-scratching unanimous decision to Mauricio Herrera. This … END_OF_DOCUMENT_TOKEN_TO_BE_REPLACED 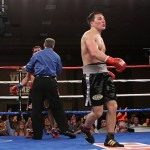 Russian pressure fighter, Ruslan Provodnikov (18-1, 12 KOs) looks to shake off the loss he suffered to Mauricio Herrera on his last Friday Night Fights appearance in January with a big win against Ivan Popoca (15-0-1, 10 KOs) on tomorrow's ESPN2 FNF at the Pechanga Resort & Casino in Temecula, California In his loss, the 27-year old jr. welterweight prospect dropped a … END_OF_DOCUMENT_TOKEN_TO_BE_REPLACED