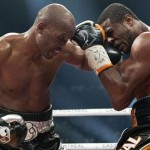 by Chris Milton It looks like Pascal Hopkins 2 is on and, surprisingly, back in Canada. Chad Dawson will be on the undercard setting up a winner takes all bout later on this year. There are also rumours that Bhop now has a 3 fight HBO deal, which seems more than a little odd considering that since he defeated Pavlik, HBO wouldn't go near B-hop with a barge pole. Amir Khan … END_OF_DOCUMENT_TOKEN_TO_BE_REPLACED