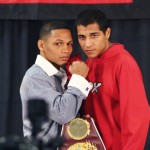 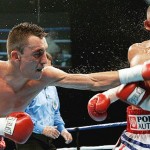 by Dafydd Thomas Reigning junior flyweight world champion Ivan Calderon has had his work cut out for him over the past two years. In boxing, guys that cut frequently have an uphill battle before a fight even starts, and Calderon has had more than his fair share of cuts over the past two years. In his past fight with Rodel Mayol, Calderon showed signs that he was slowing … END_OF_DOCUMENT_TOKEN_TO_BE_REPLACED