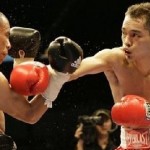 by Chris Milton Audley Harrison has announced he will continue to box. Question is will he ever actually fight? Carl Froch put on a boxing clinic last weekend. Carl now looks to be the favourite to make it through to the final alongside Andre Ward. Anyone else think that Ward is going to get a bye into the finals as Abraham will pull out? According to Dan Rafael, Juan … END_OF_DOCUMENT_TOKEN_TO_BE_REPLACED