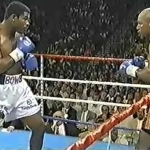 by Ted Sares Bowe vs. Gonzalez (1995) "He [Cuban defector Jorge Luis Gonzalez} goes crazy, man, when he sees Bowe," today. "I've told him, 'You're not helping yourself to a fight when you do that.' But I can't stop him. When he sees Riddick on Arsenio, he grinds his teeth."--Gonzalez’s promoter, Luis de Cubas, "Bowe is a cow, a hyena, and I am a lion," said Gonzalez, … END_OF_DOCUMENT_TOKEN_TO_BE_REPLACED