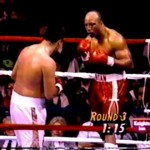 by Green Machine It was tournament boxing. It wasn’t the Golden Gloves or the Olympics, and it wasn’t today’s Prizefighter, though it was just the same. After a failed attempt by Don King to put together a mega-tournament between the world's top heavyweight prizefighters had floundered, the plan went through, only in a different form. What we ended up with was “The People’s … END_OF_DOCUMENT_TOKEN_TO_BE_REPLACED