by Fox Doucette Novac called. It wants its dinosaur back. Claude Bell's plaster blasts from the past formed the backdrop for ESPN2's Friday Night Fights this week in Cabazon, California, and anyone who spent the night playing Fallout: New Vegas instead of watching the fights? They didn't miss anything. But the diehards who watch every fight, every week, every time? Let's dive … END_OF_DOCUMENT_TOKEN_TO_BE_REPLACED 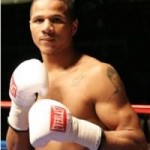 Even the most optimistic promoter wouldn't say “look out Klitschkos, there's a new boxing brotherhood in town”. But brothers Andre and Anthony Dirrell doubtless hold that ambition at super middleweight. Anthony (22-0, 19 KOs) is in action on Friday Night Fights on ESPN2 this week against Kevin Engel (18-4, 15 KOs) in what looks to be a showcase more than a contest. Engel, for … END_OF_DOCUMENT_TOKEN_TO_BE_REPLACED