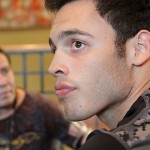 Hunger has been the key word in the lead-up to Julio Cesar Chavez Jr.'s WBC middleweight title fight with Germany's Sebastian Zbik. The word has been press released and passed along by Chavez promoter, Top Rank, so often that the weaker-willed members of the media have begun to embrace it, like it was something more than typical publicist-driven hype used to promote an upcoming … END_OF_DOCUMENT_TOKEN_TO_BE_REPLACED