Englishman Kevin Mitchell (32-1, 24 KOs) will face Felix Lora (14-8-5, 8 KOs) for a lightweight match-up on Friday, February 10th.  BoxNation will air the event at 8pm GMT. At twenty-seven years of age, Mitchell is currently ranked 6th in the world among lightweights.  His only loss came nearly two years ago against Michael Katsidis when the bout was halted in the third … END_OF_DOCUMENT_TOKEN_TO_BE_REPLACED

As Kell Brook announces his all-British clash with Matthew Hatton in March, the brash Sheffield puncher serves as a timely reminder of how easy it can be for impressionable, green-around-the-gills youngsters to fall, or be dragged, off the rails. Brook has had his share of brushes with the law, and with lapses of commitment. In 2010 he was convicted of assault after an … END_OF_DOCUMENT_TOKEN_TO_BE_REPLACED 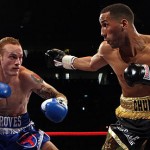 It’s been a year of near-misses for British boxing in 2011. The UK entered the year with four legitimate world champions and exited with one, and in-between eleven British fighters failed to win in world title fights. December turned out to be our winter of discontent. Amir Khan surrendered his IBF and WBA light-welterweight belts to a resurgent Lamont Peterson, and promptly … END_OF_DOCUMENT_TOKEN_TO_BE_REPLACED 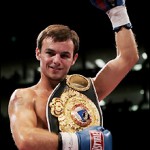 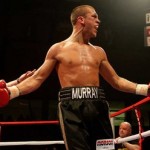 European lightweight champ, John Murray (31-0, 18 KOs) is set to take on fringe contender and former British super featherweight titlist, Kevin Mitchell (31-1, 23 KOs), Saturday July 16, at The Echo Arena in Liverpool, England. Murray won the vacant European title in May 2010, and made 2 successful defenses before he vacated his title in April. Murray opted not to fight … END_OF_DOCUMENT_TOKEN_TO_BE_REPLACED