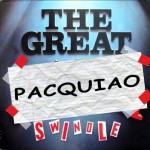 It was fight week for Manny Pacquiao-Chris Algieri, November 2014, when Pacquiao promoter Bob Arum began telling the world about secret Mayweather-Pacquiao negotiations taking place. Was the claim true or merely a ploy to create some buzz and a glossy coat for a Macau-based fight that was probably the greatest paper mismatch ever hustled to fans via pay-per-view? After … END_OF_DOCUMENT_TOKEN_TO_BE_REPLACED