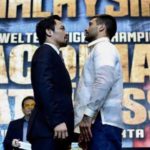 At one time, Manny Pacquiao carried the pulse of the sport along with Floyd Mayweather until the two eventually fought each other in a dreadful 2015 record breaking match. If you were to tell me that three years later that on fight week, the whole event would be a game time decision. It speaks volumes on where Pacquiao is at this phase of his career; a twilight of hurried … END_OF_DOCUMENT_TOKEN_TO_BE_REPLACED