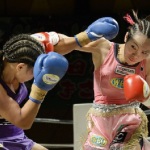 Azalea Taisho in Osaka, Japan played host to two world title contests this past weekend.  In one match up, WBO atom-weight champion Nao Ikeyama (15-3-1, 4 KO’s) made her first title defense against Masae Akitaya (9-5-2, 3 KO’s).  Ikeyama is a former WIBA title holder as a minimum-weight as well as a JWBC champ early in her career.  She won the WBO strap in May, defeating … END_OF_DOCUMENT_TOKEN_TO_BE_REPLACED