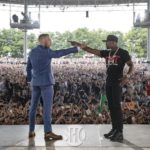 The boxing world has been scoffing at the notion that Conor McGregor can compete with Floyd Mayweather in the boxing ring when the two superstars meet at T-Mobile Arena in Las Vegas this Saturday. Experts in the media have pretty much, in unison, declared this bout the most lopsided high-end prizefight in the history of prizefighting. However, despite the seemingly universal … END_OF_DOCUMENT_TOKEN_TO_BE_REPLACED