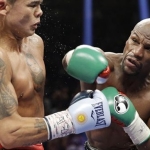 According to industry sources, the September 13 pay-per-view card headlined by the rematch of Floyd Mayweather vs. Marcos Maidana did over 925,000 buys-- making it the biggest-selling PPV event of the year thus far. Despite a heightened media effort to hold Mayweather's feet to the fire for his history of domestic abuse and what appeared to be the public's first-ever real … END_OF_DOCUMENT_TOKEN_TO_BE_REPLACED