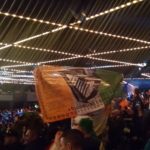 March 17th, 2017 - The Theater at Madison Square Garden The Boxing Tribune was at the Theater at Madison Square Garden for an action-packed night of boxing with an Olympic debut as the cherry on top. Gabriel Solorio vs Larry Fryers – Welterweights Both men came out throwing heavy leather, trying to set the tone for the night to come. Solorio went down on an overhand … END_OF_DOCUMENT_TOKEN_TO_BE_REPLACED 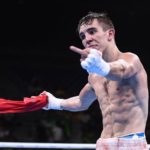 Michael Conlan’s final act as an amateur boxer was holding a pen with a Top Rank contract in front of him. His penultimate act was considerably more divisive. After losing a controversial (robbery) decision to Russian Vladimir Nikitin, Conlan stood in the middle of the ring, gave a “thumbs down” to the judges’ decision, then raised two other digits to the judges … END_OF_DOCUMENT_TOKEN_TO_BE_REPLACED