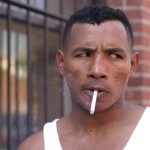 by Paul Magno Described as the "Craziest man in the sport" by Ring Magazine, Ricardo Mayorga is making his return this Friday, December 17th against Michael Walker, on the Odlanier Solis-Ray Austin undercard in Miami. Despite over two years of inactivity and an aborted attempt to engage in an MMA contest, Mayorga's name still registers among fans and still captures … END_OF_DOCUMENT_TOKEN_TO_BE_REPLACED