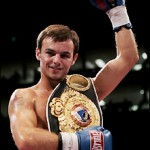 It was a fight widely expected to be announced on the undercard of ‘that bill’. You know the one. The ‘Luxembourg Fight’. The one categorically NOT being promoted by Frank Warren. The venue was seemingly tailor-made for a showdown between Britain’s top two lightweights, Ricky Burns and Kevin Mitchell. Apologies to Gavin Rees and Derry Matthews, who may wish to … END_OF_DOCUMENT_TOKEN_TO_BE_REPLACED