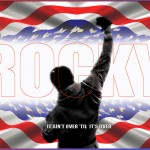 It was sorely tempting this week to deliberately ignore the news from Germany that Sly Stallone and the Klitschko brothers have teamed up to produce a stage version of the former’s Rocky movie franchise, set for 2012. I say tempting because the prospect hardly fills one with a sense of joy – the films themselves (were there six in the end, or seven?) were pretty dreadful in … END_OF_DOCUMENT_TOKEN_TO_BE_REPLACED