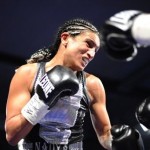 In France, Nadia Hokmi (20-6-1, 9 KO’s) took a 10 round decision over Linda Soto (6-4, 3 KO’s) to win the vacant WBF bantamweight title. Hokmi, who has held the WIBF and WBF super flyweight belts had failed in multiple title shots prior to 2008 but has since been on a 10 fight winning streak including victories over Elena Reid and Julia Sahin. The knock on her is that she … END_OF_DOCUMENT_TOKEN_TO_BE_REPLACED