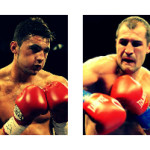 On Saturday, August 17th, WBO light heavyweight champion Nathan Cleverly will make the fifth defense of his title when he challenges fellow undefeated Sergey Kovalev in a scheduled twelve-round bout at the Motorpoint Arena in Cardiff, Wales, United Kingdom. The bout will be part of an HBO split triple-header which will be headlined by Daniel Geale Vs. Darren Barker, and … END_OF_DOCUMENT_TOKEN_TO_BE_REPLACED

As they often say in a dispute-- there's one side, the other side, and, somewhere in the middle, the truth. In the case of Adonis Stevenson's first round blow-out of Chad Dawson Saturday night at the Bell Centre in Montreal, Quebec, nobody is denying the outcome. Nobody is denying the thudding overhand left that dropped Dawson or the subsequent, dopey "who ate my Cheerios" … END_OF_DOCUMENT_TOKEN_TO_BE_REPLACED

Nathan Cleverly 26-0 (12 KOs) gave a dominant performance in out-pointing Robin Krasniqi 39-3 (15 KOs) and retaining his WBO World Light-heavyweight championship, on Saturday night, at London’s Wembly Arena. Making the fifth defence of his title, Cleverly displayed a classy mix of aggressive boxing to have the game Serbian born challenger on the back foot for much of the … END_OF_DOCUMENT_TOKEN_TO_BE_REPLACED 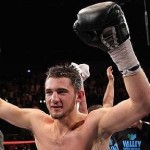 Nathan Cleverly 25-0 (12KOs) will be headlining a bumper Wembly bill in London this Saturday, when he defends his WBO World Light-Heavyweight Championship against mandatory challenger Robin Krasniqi 39-2 (15 KOs). Promoted by Frank Warren, the fight card has been dubbed ‘Rule Britannia’ and will also feature the return of controversial Heavyweight Dereck Chisora, and an … END_OF_DOCUMENT_TOKEN_TO_BE_REPLACED 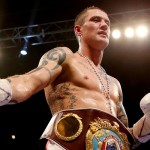 This week, WBO lightweight champ, Ricky Burns announced that he was ending his relationship with UK promoter, Frank Warren. Not-so-coincidentally, the Burns defection would come along just a couple of days after it was announced that the Burns-Miguel Vazquez WBO/IBF lightweight title unification bout slated for March 16 would be postponed. A Vazquez stomach infection was … END_OF_DOCUMENT_TOKEN_TO_BE_REPLACED