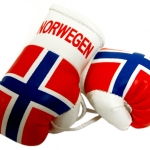 Tuesday in Oslo, a vote held in Norwegian parliament passed by a close margin of 54-48 to once again legalize professional boxing in Norway after a 33 year ban. The sport has been illegal since 1981. The “Knockout Law” was voted in during June of that year, 54-24, the law banning any sport where winning or scoring of points could come by way of knockout. Those in … END_OF_DOCUMENT_TOKEN_TO_BE_REPLACED