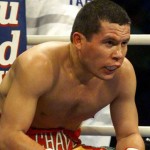 "El Gran Campeon Mexicano," also known as "The Lion of Culiacan" is a six-time world champ in three weight classes and regarded by many as the greatest Mexican fighter of all time. He will be inducted this weekend into the International Boxing Hall of Fame. One of ten brothers and sisters raised in a railroad car in Ciudad Obregon, Sonora, Mexico, Chavez made his debut at 17 … END_OF_DOCUMENT_TOKEN_TO_BE_REPLACED