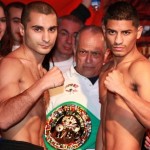 by Chris Milton The British Board of Boxing Control is investigating Audley Harrison and could withhold his purse from the David Haye debacle. Why? The BBBC should withhold their own wages for sanctioning the fight. Tomasz Adamek won a Heavyweight fight Thursday night against a guy that was smaller than him. I thought he was supposed to be preparing for the Klitschko … END_OF_DOCUMENT_TOKEN_TO_BE_REPLACED