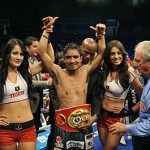 Auditorio Municipal, Tijuana, Baja California, Mexico-- A close, entertaining scrap that could've developed into something really special was ended early due to an unintentional headbutt in the sixth of twelve scheduled rounds After the dust settled and the ref called for a technical decision to be issued, it was Mexico City's Rodrigo Guerrero (16-3-1, 10 KOs) who came away … END_OF_DOCUMENT_TOKEN_TO_BE_REPLACED 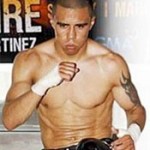 Raul “La Cobrita” Martinez (28-1, 16 KOs) isn’t a household name. You won’t find many casual boxing fans posting on forums about his upcoming IBF super flyweight title fight with Rodrigo Guerrero. He isn’t a top priority to his promotional team, and his chances at the big time have been few and far between. What the 29-year old native of San Antonio has in his favor is … END_OF_DOCUMENT_TOKEN_TO_BE_REPLACED 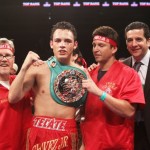 San Antonio, TX- Those watching Julio Cesar Chavez Jr. (41-0-1, 30 KOs) for the first time had to wonder why the son of the legend from Culiacan, Mexico has been the target of such intense criticism over the years. The fact of the matter was that the 24-year old who showed up at the Alamodome to fight Ireland's John Duddy (29-1, 18 KOs) was a vastly improved and overall much … END_OF_DOCUMENT_TOKEN_TO_BE_REPLACED 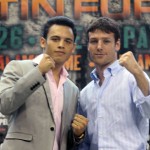 For Saturday's Latin Fury 15 PPV from the Alamodome in San Antonio, TX: John Duddy 159 vs Julio Cesar Chavez Jr 160 Marco Antonio Barrera 141* vs Adilton Dejesus 138 (A money deal was made between Barrera and Dejesus for Barrera coming in above the agreed upon 138 lb. limit.) Raul Martinez 114.5 vs Gabriel Elizondo 114.75 Salvador Sanchez 125.25 vs Tomas Villa … END_OF_DOCUMENT_TOKEN_TO_BE_REPLACED

by Russ ChoateWelcome to the second installment of Boxing in the Heartland, a monthly wrap up of the fight action in the Heartland of America.The month got underway in Oklahoma, with Allan Green (29-1) trying to show why he should have been included in the Super Six Tournament. He defeated Tarvis Simms (25-1-1) by unanimous decision in their 10 round bout.On the 16th Joel “Love … END_OF_DOCUMENT_TOKEN_TO_BE_REPLACED