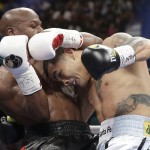 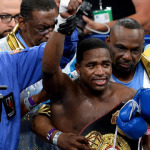 U.S. Bank Arena, Cincinnati, Ohio-- It was a lot closer than many had expected, but at the end of a long, tough fight, hometown favorite Adrien Broner (29-1, 22 KOs) closed the show with class, dropping Emmanuel Taylor (18-3, 12 KOs) with less than twenty seconds to go in the twelfth and final round before taking a unanimous decision by scores of 115-112, 116-111, and … END_OF_DOCUMENT_TOKEN_TO_BE_REPLACED 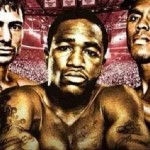 On Saturday, September 6, Showtime will be televising a triple-header featuring Adrien Broner, Lucas Matthysse, and Andre Berto in separate bouts held at the U.S. Bank Arena in Cincinnati, Ohio. All three fighters are looking to fight their way back from tough losses and stalled career momentum. And while all three contests are designed to be challenges just tough enough to … END_OF_DOCUMENT_TOKEN_TO_BE_REPLACED