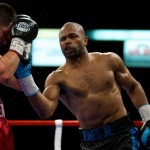 In a fight that some are labeling a suicide mission, former four-division champ, Roy Jones Jr. (54-7, 40 KOs) has decided to once again step into the ring, this time in Moscow, May 22nd against top-ranked Russian, Denis Lebedev (21-1, 16 KOs) in a cruiserweight contest. The 42-year old Jones has lost three of his last five and six of his last eleven, including brutal … END_OF_DOCUMENT_TOKEN_TO_BE_REPLACED